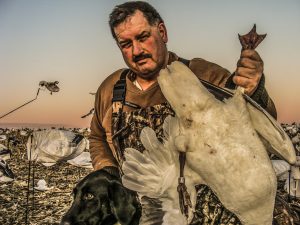 Up North Outdoors, Inc. has run snow goose hunts since 2001. We have run hunts in several states, but past couple seasons we have focused our efforts on Arkansas and Iowa. Portions of these two states are major snow goose migration corridors. Untold numbers of flocks migrate through providing great decoying action. Peak hunting occurs late January through the end of March during the Conservation Order. This season is also known as the Spring Snow Goose Season. This season has been in effect since 1999 to help control the snow goose population. It has liberal laws allowing the use of electronic callers, unplugged guns, and most states have no daily or possession limits.

We kick off the spring season in Arkansas. Arkansas usually starts their spring goose season the Monday after the last weekend in January, and we continue hunting through late February. There is a large number of snow geese that winter in Arkansas. In addition to these birds, there is a steady supply of snow geese migrating through that have spent the winter in the southern gulf coast states and Mexico.

Our last stop during the spring snow goose season is in Iowa. Squaw Creek National Wildlife Refuge is about 60 miles south of the Iowa border. Millions of snow geese stage on Squaw Creek. Up North Outdoors, Inc. was one of the first to guide snow goose hunts in that area. In 2015, after 14 seasons, we left the Squaw Creek area because of the excessive hunting pressure. Iowa allows our snow goose spreads to be set well north of that hunting pressure but still catch the vast strings of snow geese that leave the refuge heading for South Dakota.

What You Need To Succeed! 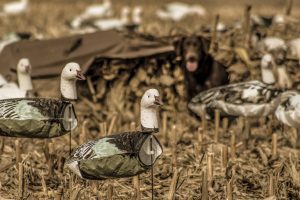 Our Arkansas and Iowa goose hunts take place on our hunting leases over 1,800 Deadly Decoys® windsocks. These are a high-end windsock decoy with an internal BackBone™ support that gives them a full body even with low wind speeds.  The blinds we use are a larger sized lay down blind. They provide us the combination of concealment, comfort, and mobility that we require as we move from area to area. Our electronic callers are capable of producing a sound quality of the utmost clarity. A large spread of realistic decoys, concealment, and high-quality sounds are the keys to successfully decoying snow geese. We have put a major emphasis on refining these areas over the years. Additionally, we have several subtle tactics that we use to set us apart. These little things are what make our hunts so consistent and successful.

All our spring snow goose hunting is done over semi-permanent, also known as migrator spreads. In this style of hunting decoy spreads are rarely moved but rather we set up in known migration corridors decoying the migrating snow geese as they fly over us.  In recent years, we have focused on hunting migrating snow geese instead of places where they stage. Staging areas are typically a refuge that attracts massive numbers of snow geese and snow goose hunters. It also attracts massive numbers of snow goose hunters. We have found that staying away from the hunting pressure is a more enjoyable and successful way to hunt snow geese. We measure this success not only by the more than 68,000 snow geese we have harvested in the last 18 spring seasons but also by the high percentage of repeat clientele.

There has been a lot of hype surrounding the spring snow goose season. Some of its warranted, a lot of it is overblown social media and marketing. If you take the time to watch our videos, read our past hunting reports, and look at the pictures in our galleries you will see that we have many truly amazing days in the field each year. It takes the right conditions, good shooting, and a little luck to have those 60, 80, or 100 plus bird-days. Hunters should come expecting a daily harvest in the teens or twenties with potentially more abundant days. These are decoying birds with most shots called in the 25-50 yard range. In reality, snow geese are the toughest of all waterfowl to decoy. The enactment of this spring snow goose season and its liberal laws are a testament to this fact. We are highly successful, but we don’t guarantee birds. Slow days or even a rare zero do occur.