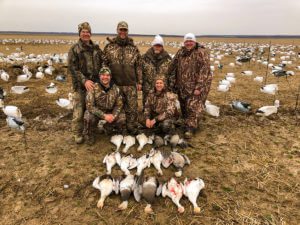 Yesterday was our last day, which was a half-day hunt until noon. The last weekend we run hunts we do this to allow us to be able to pull spreads. We had all of them out of the ground by 6 pm. We made quick work pulling the more than 12,000 decoys over a 70-mile wide path. Our high field shot 15 while the low shot 2. It was similar hunting to what we have seen the last week or so. Even though it was raining there were geese moving north. Not tons but we saw flocks all afternoon as we pulled decoys.

Today we are leaving Arkansas for Iowa. It wasn’t our best season nor our worst; it was an ok year. We shot a total of 1728 snow geese, which is more than double our total harvest in 2019. Remember, we lost five days of the season due to the changing of the regular duck season resulting in 43 fewer hunt days, but we still shot more than double the geese.

How was the weather in 2020? There was a bunch of rain this year, but the rain wasn’t monsoon rains like the past two seasons. They were just enough to keep things wet. There seemed to be more than the average number of morning hunts that had little to no wind. Mornings had better hunting than afternoons most of the time. To wrap it up, we have shot more than double the number of birds in fewer days than in 2019. We will mark that as a win.