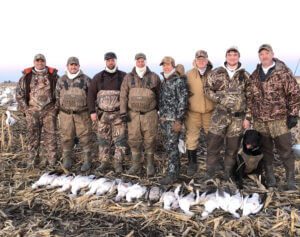 Jim, Curt, Brock, and I made our way from Arkansas up to Iowa. Man, what a difference in bird numbers and snow on the ground. Temps hit 62 today. All of the fields were between 9 and 15 but one. They shot a zero. I just happened to be taking Jim and Curt to show the new decoy spreads. It was 5:15, everybody was at the truck or had left. I have never understood why hunters go right before the evening flight. If you want to take a break, the best time for that is noon-3 pm. Migrators show up often enough, but it is likely the slowest part of the day. Why sit through the most uneventful part of the day then leave just before the birds are going out to feed. It is one of the better times. I explained this to the hunters remaining as we watched several flocks look at the spread without the callers running.

To kill more snow geese. Stay in your blinds with the doors shut. Take break midday if you want one. As I type, several flocks are migrating over the motel. The push is on this week. There should be new birds tomorrow!