As I was sitting here getting ready to type this report, I received a text from my good friend and past guide Jake Groth. The text message read, twenty years ago today, we were hunting in SW IA for snow geese. That hunt was his first-ever snow goose hunt and my first hunt during the conservation order. It went so well; I decided to start guiding snow goose hunts. Fast forward twenty years, we have shot over 70,000 snow geese, hunted thousands of hunters from all over the world, met some great friend and couple jackwagons, and I’ve had 4th dogs—Coke who was nearing the end of her career when I started guiding. Lil my Chessie, she was not a lab but everybody who is a duck hunter should have a dog like her. Kali, who is now nine and semi-retired. She now enjoys going for rides to pick the kids up from school and much as hunting. Gauge, who is a hard-charging intense dog that gave me fits today but a marking machine for a dog that just turned 2. Where does the time go? 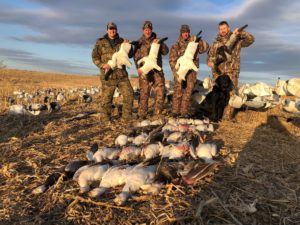 Today was a cold start but a hot afternoon. The temp made a 30-degree swing, hunting was a little slower but still a decent day. Our high field shot 29. The low field shot 3. There are a lot of birds around; some groups were killed by large feeds near them. Some didn’t see many. I hopped into the field that shot 29 for a bit this morning. There would have been a lot more shot if it were not for Specks. We don’t shot mixed flocks; there were several that we couldn’t shoot or had to take longer shot after the Speck left gun range. Today was a typical average day in the snow goose fields.