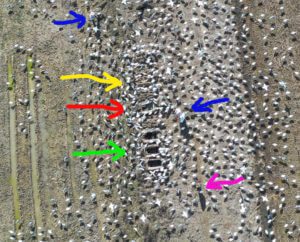 Since it rained today, only 1 group hunted until 9:30, and then they quit too. There are a bunch of birds in the area; we might even get more given the cold that is rolling in the north of us. However, I would just as soon it turn warm, sunny, and they start pushing north. Once that happens, our hunting should pick up to what it was the first few days of the season.

So since there is nothing to report, I thought I would show you a drone photo of the blinds in one of our spreads.

The green arrow point to 3 open blinds. They stick out, when you get out of the blinds, close the doors.

The red arrow is also an open blind; however, it is the guide’s blind. He has an olive drab yoga mat. It doesn’t stick our nearly as bad as the blinds where the black seat is not covered.

The yellow arrow show closed stubbled blinds. Those five blinds are hard to pick out.

The blue arrows are guys standing in white hoodies. The purple arrow is a guy in camo.

I thought this was interesting.