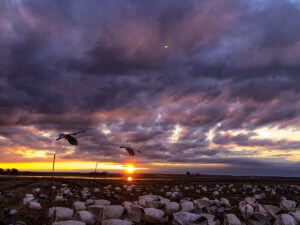 Today started cloudy, about noonish, the sun came out, and the birds stopped flying. We are in a bit of a lull. Today was a slow day for us. High field shot 13, and we had two field shoot 0’s. We need a change in the weather, there are a bunch of birds around, but they are stale. They have been here for a while. We need sun, warm, and south winds to get things rolling again. Fortunately, it looks like we are going to get it. This year has to be one of the slowest migrations I have seen in Arkansas. Now granted, with the change in the season dates, we did come down a week later than usual, but most years there is a pretty steady push north by now. We have had some migration, but it just doesn’t seem like as many as most other years. I know there are a bunch of birds south of us.

New groups coming in I have sent you all text, talked to a few of you, and most of the guides have reached out to you as well. We will see you at 4:30 am.