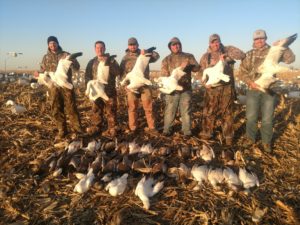 Today was another nice average day. The mornings were much slower than in the afternoon. Late afternoon there were a lot of birds rolling north—still more than plenty of birds to hunt in the area. I spoke with several guide friends. There are snow geese in North Dakota was one report. Another shot 30 snow geese down in Stuttgart, AR. That is a strung out-migration, which I believe is a good thing. One of the main reasons is it spreads the hunting pressure out over a large area.

The results from today. The high field shot 33 snow geese. Our low field shot 3. The field with three say plenty of birds, but they were not willing to play today. Peaks & valleys, spring snow goose hunting, is full of peaks and valleys. Tomorrow is suppose to be windy. The snow geese will be scraping the corn stalks with a high wind.