Both of our Arkansas groups of hunters shot in the ’20s. A young man got his first snow goose…made lifelong memory. A tremendous number of geese pushed north, many snow geese, but an equal number of specks. Both fields said there got specked over, meaning a big flock of snows with specks that decoyed. We can’t shoot into a mixed flock of snow geese until all of the birds that are not in season clear out. If the shorter range forecast (less than five days) holds, there will be a significant influx of geese into and through both NE Arkansas and SW Iowa. 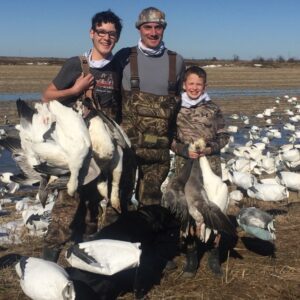 We made our way up 9 hours to Iowa, where there is a few geese already but not a ton yet. There are a bunch of dark geese in a portion of the area. Most of the snow is gone. The short-range forecast looks lovely in Iowa. It seems like all of the stress, phone calls, and texting hunters paid dividends. Now that I’m up here, I feel we might have been able to run this weekend, but likely the best option was to start March 1.

Speaking of the weather, you should not put much credibility in a long-range weather forecast. It is wrong as much as it is right. Look at the swing on the temps they are predicting March 1-4.